Although there are many events to look forward to throughout the year, Halloween appears to be among the most exciting and anticipated. And why is that? Well, for starters, the outfits mania, decorations, trick-or-treating chants, and enchanting dinner parties/gatherings are enough to grab anyone’s interest! Hence, just like every year, the fashionistas and many others are looking forward to celebrating the event.

But what could be the problem? Perhaps selecting the right outfits? Believe it or not, having a perfect outfit planned way before Halloween is a dream of many! Or in other words, selecting the right outfit for the occasion is just like finding the right flavour for your morning coffee. Plus, with so many new and old clothing trends making limited or everlasting comebacks, again and again, we can understand your increased stress levels! So, what to do about them, right?

The answer: Squid Game Outfits! Netflix’s ever-popular Korean TV Drama Squid Game still stands as the top-watched show of the year. From the plot execution to characters, heart-grabbing scenes, and trendy outfits, the demand for the series’ inspired outfits was already expected for the upcoming Halloween season. Thus, let’s not keep you entangled with these starting words and get straight to our business, i.e., suggesting the best Squid Game Group Halloween Costumes to add to the wardrobes immediately!

But Do You Remember What Squid Game Is About?

The ever-popular Squid Games TV Series revolves around in-debt people given a choice to compete in some games for the prize money of $4.56 million. At the start, 456 players appear in specific uniforms and begin to play the games such as Red Light, Green Light, Honeycomb, Marbles, Tug of War, Glass Bridge, and the Squid Game. However, the series takes drastic twists when the players get to know that if they’re out, they will have to die regardless. Moving on, showcasing humans’ devilish instincts to do whatever it takes to win, the series still stands as one of the most-watched shows of all time. Plus, ever since the creators hinted about its second season, the demand for its outfits and love for the characters keeps increasing with each passing day.

What’s Trending About The Show These Days:

Although it has been a while since the show initially hit the screens, the thrill and popularity of it are still pretty much relevant. Recently, the creators have also released an unseen clip from the first season while talking about the new season details, and the audience is indeed obsessed with it!

Other than that, since it’s the Halloween season, how could we let you sleep on something as iconic as the Squid Game Halloween Costumes 2022 trending this year as well?

Let’s Dig Out The Outfits!

Since we all agree that it’s the season to dress up as Squid Game players, here’s the list of the best-selling Squid Game Outfits that you can consider adding to your wardrobe immediately. 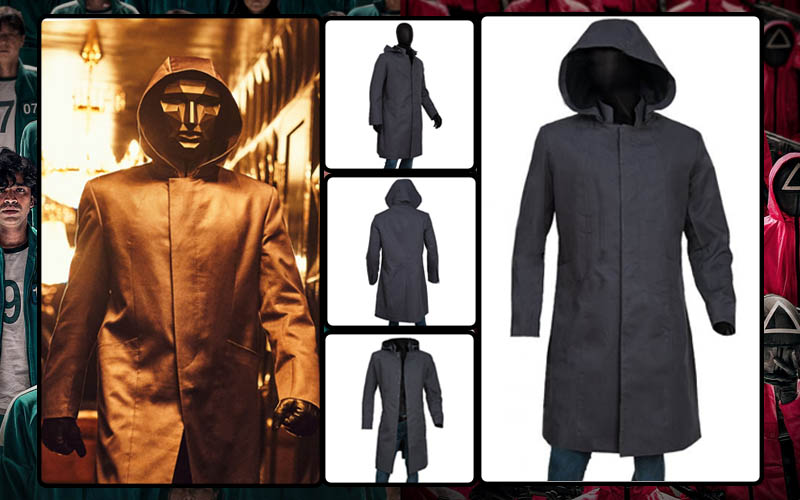 The Frontman in the series had everyone’s attention from the start; the in-between glimpses of him watching the characters on screen, making sure nothing goes wrong, and having the authority to decide who lives and who dies; without him, the show would not have been the same! This is why we have sorted out the highly in-demand Squid Game Frontman Coat to help you achieve similar stances as him.

Now, although the coat appears to be a simple one, trust us, you can do fashion wonders with it. Firstly, there is obviously an option to recreate the similar Frontman look by pairing it with similar clothing apparel and an iconic mask. However, you can still wear the apparel even after Halloween or at cosplay parties. From formal to streetwear fashion, the stylists at Jacket Hub believe that this Squid Game Coat would be anything but a fine, long-lasting investment, which you would not regret! So, make up your mind quickly, as with Halloween getting close, only a few articles remain in stock. Hurry up! 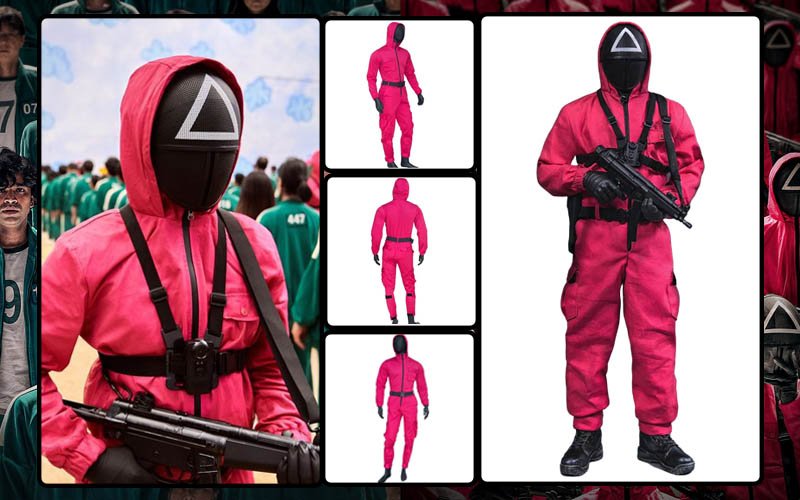 Have you ever wondered how jumpsuits became a trend? Although the apparel was invented way back in the early 90s for the world-war fighting pilots, the trend kept hitting the fashion charts on and off until the 2010s, when everyone in the fashion town felt drawn towards jumpsuits/dungarees. Even though comfort and easiness are always the first when it comes to buying jumpsuits, the enchanting evolution is quite appealing. Besides, who would not want to get away from the constant hassle of picking or pairing two separates when they can get it in just one piece, right?

That said, the Squid Game TV Series featured a series of guards alongside the players, dressed up in pink-colored jumpsuits and following the rules of being in administration/authority. If you want to recreate a similar stance, better buy this Squid Game Guard Jumpsuit right away and pair it with famous face masks to complete the look. And just like the Frontman-inspired coat, you can also wear the jumpsuit to several other occasions. 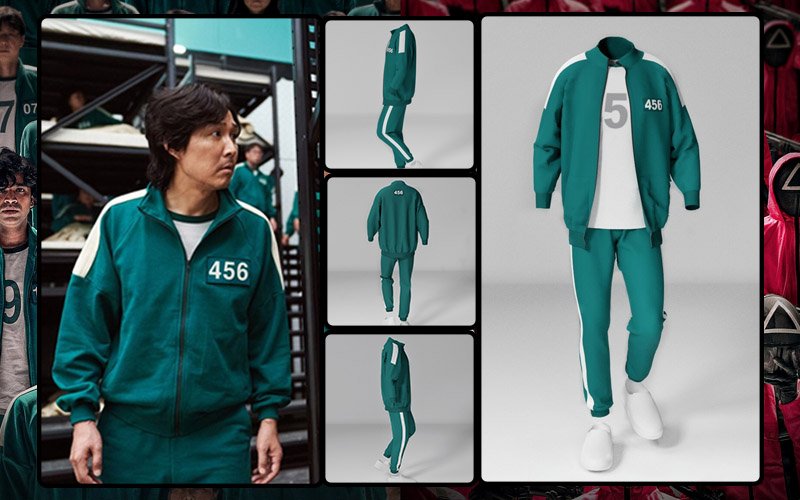 Now, what would be the trend of Squid Game Outfits without the iconic players’ costumes, right? From players 001 to 456, everyone appears to be dressed in a matching green colored tracksuit with their number imprinted on the front and back.

Now, what’s so special about tracksuits, you might ask, or why should you buy one, especially for this Halloween?! Firstly, thanks to the past few years, people have started ditching extravagant looks and opting for the easy-comfy ones that don’t require much effort but help them make stunning fashion statements anyway. From the Kardashian-Jenners to Queen Riri, and even prominent fashion houses like Gucci, everyone is coming forward to revive comfortable tracksuits.

So, imagine you are not really in the mood to dress up that extravagantly yet want to make an everlasting impression on others still, then don’t think much and start adding this best-selling Squid Game Green Tracksuit to your wardrobes right away. Plus, just get yourself white sneakers for a further realistic effect, and you will be all set! 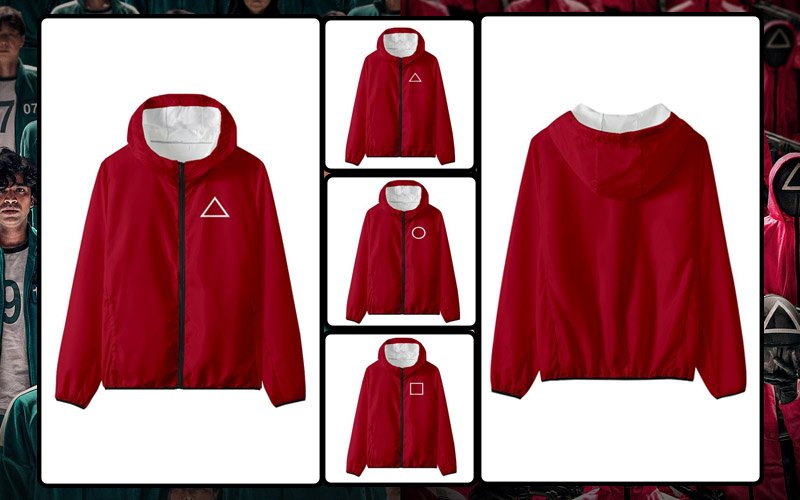 It has been a while since most followed fashion influencers or enthusiasts have started preferring comfortable yet fashionably relevant fashion statements, and hoodies work the best for such effect. Plus, with the colder seasons coming our way, there could not be a better time than this to invest in a hoodie, especially the forever-trending Squid Game Guard Pink Hoodie.

Squid Game is still trending for its intriguing plot of indebted people playing deadly games to win the prize and iconic outfits which can be recognized from afar. While there are many other characters to look forward to when buying the inspired outfits, the guards’ synchronized clothing is also one of the most recreated clothing trends.

So, if you still have not decided on your Halloween costume of the year, it is time to add this listed hoodie to the cart and receive all the compliments. And as we have been talking about everlasting investments since the beginning, a pink hoodie in your wardrobe can lead to dropping many other casuals to streetwear fashion statements without requiring much effort. That said, place your order for the aforementioned Squid Game Halloween Costumes 2022 NOW!